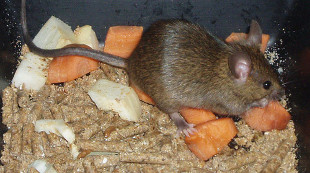 Neurons in the hypothalamus that express the melanocortin 4 receptor (MC4R) and communicate with a region at the back of the brain create a feeling of fullness that stops hungry mice from eating when the brain cells are activated, according to a study published today (April 27) in Nature Neuroscience.

Previous work demonstrated that a group of MC4R-expressing neurons in the hypothalamus regulated body weight and feeding. In this latest study, a team from Harvard Medical School, the National Institutes of Health, the University of Edinburgh, U.K., and the University of Texas Southwestern Medical Center genetically engineered mice with MC4R neurons that could be turned on or off by treating the animals with a drug. When the researchers shut the neurons off, mice that had just eaten and should have felt full continued to eat. Switching the neurons on led hungry mice to stop eating.

The researchers then genetically engineered mice whose MC4R pathway from the hypothalamus to the back of the brain could be turned on with light, finding that activation reduced overall eating. To test whether easing hunger pangs could be a driving force behind eating, mice were placed in a food-free environment where they could choose between a blue-light area that activated the MC4R satiation pathway and a control environment. Hungry mice strongly preferred the lit area, while mice that had been recently fed showed no preference.

“Our results show that the artificial activation of this particular brain circuit is pleasurable and can reduce feeding in mice, essentially resulting in the same outcome as dieting but without the chronic feeling of hunger,” study coauthor Bradford Lowell of Harvard’s Beth Israel Deaconess Medical Center said in a statement. In their paper, the authors suggested that the circuit could provide targets for new weight-loss drugs.