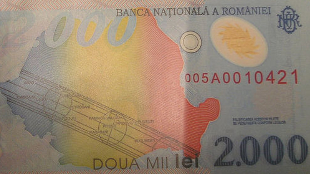 Romania special money made to celebrate the 1999 eclipse WIKIMEDIA, MARINA TThe Romanian government recently told grantees of the National Research Council (CNCS), Romania’s primary funding agency for federal research, that it would be slashing the budgets of some multi-year research grants awarded in 2011.  In response, 19 members of the Council members resigned last week (April 12)—the retroactive cuts were apparently “the final straw in already strained relations between the government and the council,” ScienceInsider reported.

When the cuts were announced, 568 Romanian researchers signed a protest letter to the Romanian government. Though the government promised to make up the difference in 2014, the letter points out that similar cuts in 2010, which came with similar promises, were never made good.

Another issue that led to the CNCS members’ resignation was a new requirement that grant applications are reviewed by international panels and that papers resulting from...

Now, the Romanian Ministry of Education, Research, Youth and Sport is asking universities for nominations for new Council members. But Romanian paleoclimatologist Bogdan Onac of the University of South Florida in Tampa, who had 45 percent of his 2013 CNCS grant money swiped, worries that this approach will not yield the best possible replacements. “Our experience is that the universities will always propose people who are high in their structures but not necessarily scientists with good publication records,” he told ScienceInsider.