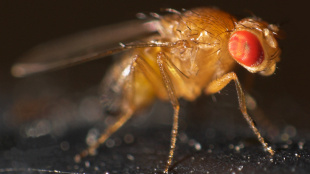 Wikimedia, Mr.checkerWhen fruit flies carry a gene mutation linked to epilepsy in humans, they suffer temperature-dependent seizures sparked by overactive sodium channels in their neurons, according to a study released last week (October 10) in the Journal of Neuroscience. The findings provide a unique genetic model for future epilepsy studies and illuminate the molecular path of seizure disorders.

In collaboration with neurobiologist Diane O'Dowd’s lab at the University of California, Irvine, Robert Reenan’s team at Brown University swapped the fly’s sodium channel gene with a mutated form of the similar human gene, SCN1A. People with SCN1A mutations suffer from epileptic seizures triggered by high, fast-onset fevers, which mostly occur in children who are sick from respiratory or gut infections.

When the team gradually raised the temperature on their engineered flies—by dipping their cages in hot water—the flies began twitching and were unable to stand or fly (see...

When the researchers peered into the mutant flies’ brains, they found overactive neurons sending too many electrical pulses through their sodium channels. “The mutant channels pass too much current," Reenan, senior author on the study, said in a press release. "The channels open too easily, and they take more effort to close. They open too soon, and they close too late. That effect is magnified at higher temperature.” The result, he added, is berserk brain signaling that leads to seizures.

The team hopes that the new information could redirect seizure research, and that their model will help identify new treatments or genetic workarounds for epileptic syndromes, such as secondary mutations that could discharge haywire brain pulses.