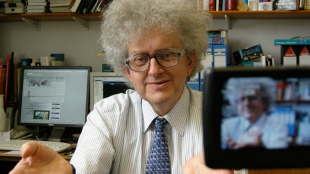 “I feel both honored and somewhat overwhelmed,” Poliakoff, a professor at the University of Nottingham, said in a statement. “I see this award very much as recognition of all the work being done in green and sustainable chemistry in the School of Chemistry by my colleagues, by my research team, and by our technical staff whose efforts underpin so much of our research.” According to Chemical and Engineering News, Poliakoff has “contributed to the development of supercritical carbon dioxide and supercritical water as solvent systems for industrial processing to replace traditional organic solvents.” In addition to his work as a chemist, Poliakoff has become a YouTube celebrity through his series, “Periodic Table of...

Campbell’s work at Pfizer helped launch the erectile dysfunction drug Viagra, although he told BBC News that he didn’t invent it himself. “I’m not on the Viagra patent. If you want, I would say I was the father of Viagra because I laid the seed and started the project.” According to a press release, “Under his leadership, the Campaign for Chemistry [through the Royal Society of Chemistry] reinvigorated chemistry education in the UK while the Simon and Jill Campbell Foundation supports state school students reading science and mathematics at Cambridge and Birmingham.”