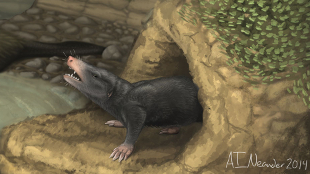 An artist's reconstruction of Docofossor brachydactylus, the earliest underground-dwelling mammal yet foundAPRIL I. NEANDER, UNIVERSITY OF CHICAGOMammals skittered in the shadows of an impressive array of lumbering dinosaurs during the Jurassic Period (from 200 million to 145 million years ago), but recent fossil finds are showing that small, rodent-like creatures may have been unexpectedly diverse back then. Researchers from the Beijing Museum of Natural History and the University of Chicago reported the discoveries, which were initially made by farmers in northeastern China, in two Science papers published today (February 13).

One of the tiny mammals, Agilodocodon scansorius, was arboreal and had long claws and sharp, gnawing teeth. It is considered the earliest tree-living mammal yet found. The other, Docofossor brachydactylus, was burrowed in the ground and is the earliest subterranean-dwelling mammal yet found. The newly discovered fossils, “give us a very different view of mammal life during...

The new species, which both belong to an order of extinct mammals known as Docodonta, may help rewrite the concept that early mammal groups were phenotypically homogenous. “What’s new with this discovery of two additional docodonts is that one of them turns out to be a subterranean mammal with highly specialized digit patterns; the other is a bona fide excellent tree climber,” Zhe-Xi Luo, University of Chicago biologist and coauthor on both papers, told Live Science. “From their locomotory functions, we can safely infer that docodonts’ ecological diversity had a tremendous range—far more so than we previously anticipated.”

“The two papers contribute substantially to the new picture of Mesozoic mammals as highly diversified,” Thomas Martin, a paleontologist at the University of Bonn in Germany told Live Science. “The old picture of generalized, ‘primitive’ creatures is no longer valid. They lived in the shadow of the dinosaurs, but they apparently flourished in that niche.”