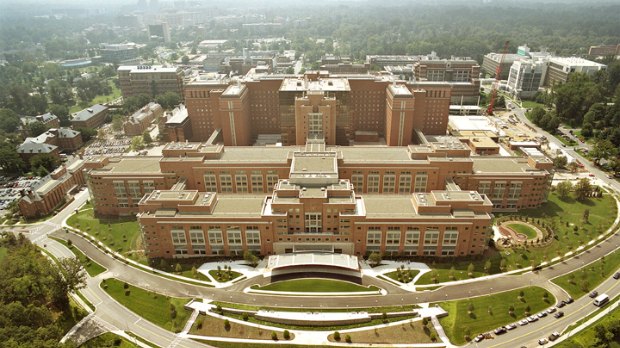 Clinical Research Center at the NIHWIKIMEDIA, NIHThe production of reagents at a cell therapy lab and a positron emission tomography (PET) facility, both part of the National Institutes of Health (NIH), is on hold because of concerns about safety and contamination, NPR’s Shots reported Tuesday (April 19).

“There is no evidence that any patients have been harmed, but a rigorous clinical review will be undertaken,” the NIH told NPR in a statement. “NIH will not enroll new patients in affected trials until the issues are resolved.”

The National Cancer Institute (NCI)-based cell therapy lab makes treatments for cancer immunotherapy clinical trials. Kite Pharma, which is conducting trials in partnership with the NCI, said in a statement that ongoing studies will continue, but “no new patients will be enrolled until the review is complete.”

The PET facility is part of the National Institute of Mental Health.

The lab suspensions follow on the heels of other recent safety issues at the agency. Last June, NIH’s production of drugs for 46 clinical trials stopped after fungal contamination was detected in batches of a medicine that had been given to patients.