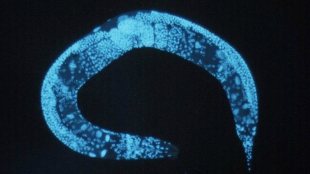 WIKIMEDIA, NIHThe lead author of two studies published in Molecular and Cellular Biology in 2013 and 2014 fudged the data on several figures, according to the conclusions of a University of Florida investigation. Both papers, which reported on transcription factors involved in Caenorhabditis elegans stress responses, have subsequently been retracted.

The 2013 study is being partially pulled. According to the retraction notice, while several findings are now unreliable, “other conclusions are not compromised by these findings of falsification.” In particular, the authors noted, the central conclusion about the interaction between SKN-1, a protein involved in stress responses and longevity, and the promoter for wdr-23, a gene important for growth, “has been confirmed independently of the first author.”

As for the 2014 paper, “given that one of our central conclusions concerning the ability of WDR-23 to block DNA binding by SKN-1 was based on these results, we retract...

According to the university, first author Chi Leung was responsible for the manipulation. The Scientist was unable to reach Leung on deadline. Keith Choe, corresponding author on both papers, referred all questions to Janine Sikes in the University of Florida press office. In an email to The Scientist, Sikes said that the investigation is ongoing and that Leung is no longer at the university.