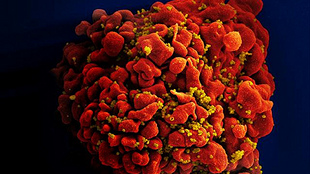 Electron micrograph of a T cell infected with HIVFLICKR, NIAIDTimothy Ray Brown, the “Berlin patient,” was the first person reported to be cured of HIV. He has shown no signs of infection for five years since receiving a bone marrow transplant to treat leukemia. Now doctors are reporting that two more patients show no signs of HIV after receiving bone marrow transplants as treatment for lymphoma.

The two men received the transplants several years ago at the Dana-Farber/Brigham and Women’s Cancer Center in Boston, researchers said at the AIDS Society Conference in Koala Lumpur today (July 3). Throughout the transplants and the recovery, the patients took anti-retroviral medication. But following extensive testing, they both recently went off their AIDS medicines. One of the patients has remained free of signs of HIV for the last seven weeks, while the other has remained HIV-free in the 15 weeks since he...

“While these results are exciting, they do not yet indicate that the men have been cured,” said Timothy Henrich, one of the Brigham and Women’s Hospital doctors who treated the patients, according to The Guardian. “Long-term follow up of at least one year will be required to understand the full impact of a bone marrow transplant on HIV persistence.”

“These findings clearly provide important new information that might well alter the current thinking about HIV and gene therapy,” Foundation for AIDS Research head Kevin Frost told BBC News. “While stem-cell transplantation is not a viable option for people with HIV on a broad scale because of its costs and complexity, these new cases could lead us to new approaches to treating, and ultimately even eradicating, HIV.”

The transplants given to the Boston patients were a bit different from the transplant that Brown, the Berlin patient, received. Brown was given bone marrow from a donor who had a rare mutation that confers resistance to HIV, but Brown did not receive anti-retroviral therapy throughout the transplant process, The New York Times explained. The Boston patients received transplants from ordinary donors without the anti-HIV mutation and remained on AIDS medications throughout the transplant process and afterwards. It is encouraging that the Boston transplants appear to have been effective, since it indicates that finding rare bone marrow donors with the anti-AIDS mutation might not be necessary for eradicating the disease.

Still, the treatment is too dangerous to be attempted on ordinary HIV patients who do not also have life-threatening cancer. The type of bone marrow transplant that the Boston men received carries a 15 percent risk of death.

Doctors believe that the treatment was effective because the patients took anti-retroviral therapy in conjunction with the bone marrow transplant. HIV often hides in bone marrow cells. Researchers speculate that once the transplanted bone marrow cells replaced the patients’ original cells, the anti-retroviral drugs kept the new cells from becoming infected. Meanwhile, the transplanted cells were killing off the patients’ original HIV-infected cells in a phenomenon called graft-versus-host disease, eliminating the disease’s reservoir from the body.

It remains to be seen whether the HIV could still be hiding somewhere in the two Boston patients’ body, such as in the brain or the gut, Henrich said.