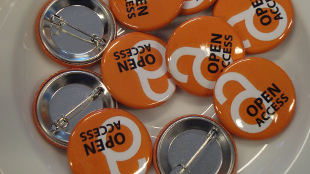 In a policy adopted by its academic council last month, the University of California (UC) system intends to make future research articles authored by faculty at all 10 of its campuses freely available to the public.

In a statement, the UC council said its “intent is to make these articles widely—and freely—available in order to advance research everywhere.” It also noted that this policy covers more than 8,000 faculty and up to 40,000 publications per year. As peer-reviewed research articles are published in academic journals, the council said they will also be published in UC’s open access repository, eScholarship, where they can be accessed by anyone at no cost.

According to The Chronicle of Higher Education, “getting 10 campuses to agree on a workable open-access policy required much cross-campus, cross-disciplinary wrangling.”

However, as UC Berkeley’s Michael Eisen noted at his blog, the policy is not...

Eisen added that because there is an opt-out option, sharing essentially remains voluntary. And the incentives—for both academics and publishers—still are not strong enough to encourage sharing, he said.

“So long as the incentives in academia push people to publish in journals of high prestige, authors are going to do whatever the journal wants with respect to voluntary policies at their universities. And so, we’re really back to where we were before,” Eisen blogged. “Faculty can make their work freely available if they want to—and now have an extra way to do it. But if they don’t want to, they don’t have to.”

Still, the Berkley professor lauded the UC council for passing this policy, which he acknowledged was likely an arduous process. “Don’t get me wrong,” Eisen wrote. “I’m happy the faculty senate at UC did something, and I think the eScholarship repository will likely become an important source of scholarly papers in many fields.” Because of its voluntary nature, though, “this is a largely symbolic gesture—a minor event in the history of open access.”

As The Verge reported, faculty at three UC campuses will begin contributing papers this November, with the rest of their colleagues following suit next year.