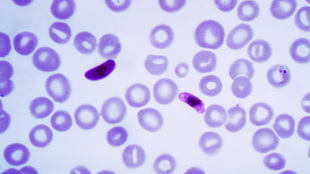 Photomicrograph of a blood smear that contains a macro- and microgametocyte of the Plasmodium falciparum parasiteWIKIMEDIA, CDCScanning the genomes of malaria parasites (Plasmodium falciparum) collected from 15 locations in Southeast Asia, scientists from the Wellcome Trust Sanger Institute and their colleagues have identified markers of resistance the frontline antimalarial drug artemisinin. Their work was published in Nature Genetics this week (January 19).

Through a human genome-wide association study, the U.K.-based team homed in on at least 20 mutations in a gene, kelch13, that are associated with slow parasite clearance rate after treatment with artemisinin-related compounds. Overall, the researchers found evidence to suggest that “the risk of new resistance-causing mutations emerging is determined by specific predisposing genetic factors in the underlying parasite population,” they wrote in their paper.

“Artemisinin is the best drug we have had for a very long time, and we want to continue this success story,” Olivo Miotto of the Mahidol-Oxford Tropical Research Unit in Thailand told BBC News. “And for that, its effectiveness has to be protected and sustained.”