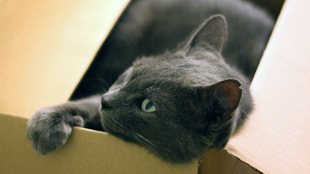 A. OLENAThese days, scientists know quite a bit about the relationship between people and their dogs. But much less is known about human-cat interactions, even though more cats than dogs live in the United States according to the American Veterinary Medicine Association. John Bradshaw of the University of Bristol, cofounder of the International Society for Anthrozoology and author of the new book Cat Sense, detailed what is known about humans’ feline companions in an essay published this week (October 14) in The Washington Post.

“DNA evidence identifies the pet cat’s ancestor as the Arabian wildcat (Felis silvestris lybica) and places its origins between 10,000 and 15,000 years ago in the Middle East,” wrote Bradshaw. He went on to explain that cats were most likely domesticated because they provided a benefit to the Natufian people, who farmed grain that attracted mice. These early relatives...

But cats have evolved several social behaviors that humans can learn to interpret. In his work, Bradshaw discovered that when two cats meet, they raise their tails straight up, which indicates  an inclination to approach. After exchanging this signal, the cats usually rub heads or groom one another. “Both rubbing and grooming are probably a way of cementing an amicable relationship,” Bradshaw wrote. And cats also use these behaviors to show affection to humans, who reciprocate with petting and stroking. “By accepting stroking, cats are engaging in a social ritual that is reinforcing the bond with their owner,” wrote Bradshaw.

Bradshaw also offered insight into the sounds that cats make. Purring, which humans often interpret as feline pleasure, “does not necessarily reveal a cat’s emotional state,” he wrote. “Instead, it seems to be what behavioral ecologists refer to as a manipulative signal, conveying a general request: ‘Please settle down next to me,’” he continued. Cats often meow to communicate with humans, but seldom when interacting with other cats. The language of meows is generally unique to a specific cat-person relationship, as cats learn which sounds elicit positive responses from people and use those sounds more often. “We could consider some of this behavior manipulative, but only to the extent that two friends negotiate the details of their relationship,” Bradshaw wrote.