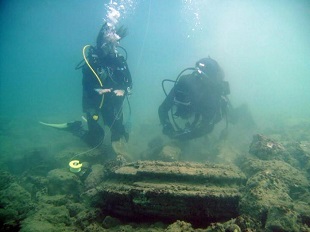 Researchers explore part of the “lost city”UNIVERSITY OF ATHENSIn 2014, tourists swimming in the sea around Zakynthos, a Greek island, found what looked like the remains of a city, complete with paved walkways and stone colonnades. But according to a study published last week (June 2) in Marine and Petroleum Geology, the structures are not an archeological find at all. They were deposited over hundreds or even thousands of years by sulfate-reducing bacteria.

“We investigated the site, which is between two and five meters under water, and found that it is actually a natural geologically occurring phenomenon,” study coauthor Julian Andrews of the University of East Anglia said in a statement. “The disk and doughnut morphology, which looked a bit like circular column bases, is typical of mineralization at hydrocarbon seeps—seen both in modern seafloor and palaeo settings.”

Sulfate-reducing microbes use methane as a fuel, and...

“This kind of phenomenon is quite rare in shallow waters,” Andrews said in the statement. “Most similar discoveries tend to be many hundreds and often thousands of meters deep underwater. These features are proof of natural methane seeping out of rock from hydrocarbon reservoirs.”