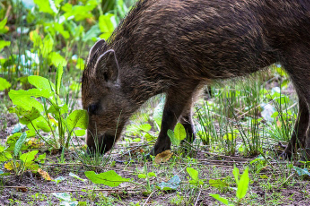 Wild boarFLICKR, ANDY HAYPig domestication has typically been considered an isolated process in Europe and Asia, during which farmers took animals with desirable traits from the herd and selectively bred them to create lineages in each region. But a study published in Nature Genetics this week (August 31) has shown that Europe’s domestic pigs often interbred with wild populations.

“What our results really show is that over the years, there has been a lot of exchange with wild populations present at many different occasions,” study coauthor Martien Groenen, a geneticist at Wageningen University in the Netherlands, told The Verge.

Groenen and an international team of researchers examined 103 whole genomes from European wild boars and European domestic breeds, as well as samples from wild boar and domestic pig in Asia. The researchers created models for a range of scenarios to explain the similarities and differences among the genomes,...

“We see this massive mosaic, with gene flow between east and west and between wild and domesticated,” study coauthor Greger Larson, an evolutionary biologist at Oxford, told Science.

The results “challenge the assumptions of 100 years of research,” Fiona Marshall, an anthropologist at Washington University in St. Louis who was not involved in the study, told Science.

Even with all of this backcrossing, however, domestic pigs still look significantly different from wild boars. The results showed that some parts of the domestic pig genome remained highly conserved—mostly those relating to bones, teeth, the nervous system, and behavior. The authors speculated that farmers may have allowed the populations to mix but still had a hand in selecting for domestic traits, counteracting the effects of gene flow and resulting in today’s recognizable pig.