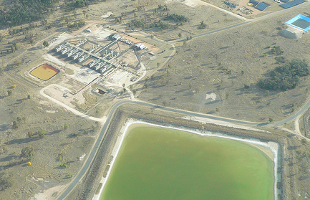 Aerial view of a CSG fracking siteFLICKR, LOCKTHEGATEFracking, the increasingly popular strategy of breaking up underground shale formations using pressurized solutions piped far under the earth to extract oil and gas, may lead to the environmental release of endocrine-disrupting chemicals (EDCs) that have previously been associated with birth defects, infertility, and cancer, according to a study published yesterday (December 16) in Endocrinology. Water sampled from hydraulic fracking sites in Colorado revealed the presence of such chemicals at higher levels than control sites, as did samples collected from the Colorado River, where wastewater from fracking operations could end up following accidental spills.

“With fracking on the rise, populations may face greater health risks from increased endocrine-disrupting chemical exposure,” senior author Susan Nagel from the University of Missouri School of Medicine told the Los Angeles Times.

Working in Garfield County, Colorado, an operational hub of fracking-based oil and...

“I’m not an alarmist about this, but it is something the country should take seriously,” Nagel told the LA Times.

“The human endocrine system and that of wildlife is guided by very small fluctuations of hormones,” agreed Meg Schwarzman, associate director of the Berkeley Center for Green Chemistry at UC Berkeley. “Even low levels of anti-estrogenic or anti-androgenic activity could potentially alter development in ways that are meaningful.”

Currently, fracking is exempt from certain regulations laid out in the Safe Drinking Water Act. Moreover, energy companies can categorize the chemicals they use in the process as trade secrets to avoid disclosure.