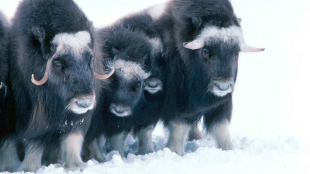 WIKIMEDIA, US FISH AND WILDLIFE SERVICEDuring 2010 and 2011, 12 muskoxen—members of a herd maintained by the University of Alaska, Fairbanks—died or were euthanized because of malnutrition. This month (June 5), the US Department of Agriculture (USDA) fined the school $127,100 for violating the Animal Welfare Act.

According to advocacy organization Stop Animal Exploitation Now, which distributed the USDA documents to reporters, the fine is the second largest levied against a U.S. university for the maltreatment of animals. This “tells me the USDA is sending a message to these facilities that they are no longer going to stand for these criminals that break the law, and we're very happy to see this,” Michael Budkie, the executive director of the organization, told the Associated Press.

University of Alaska attending veterinarian John Blake told the Fairbanks Daily News-Miner that the animals did not die of starvation, as a 2011 USDA...

According to the USDA’s report, most of the 12 muskoxen that died were emaciated and the staff at the University failed to observe their poor health and respond with proper veterinary care. “The gravity of the respondent’s violations is great,” according to the USDA report.

A university spokesperson said that the school will pay the fine, but does not admit guilt to the charges. The muskoxen herd still has 19 animals, and Blake said the diet problems have been resolved.