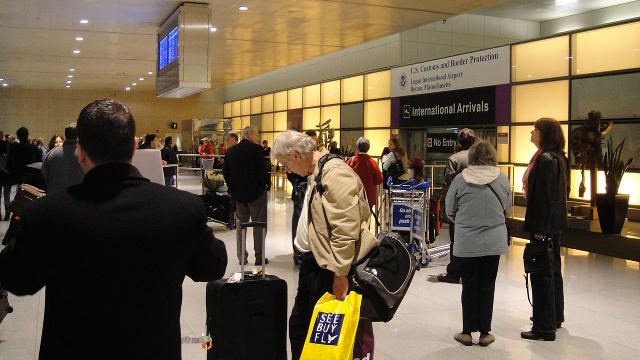 FLICKR, HILDGRIMUpdate (July 13): Dehnavi and his family were sent back to Iran after being held at Boston’s Logan International Airport by US Customs and Border Protection (CBP) for several hours earlier this week.

“This individual was deemed inadmissible to the U.S. based on information discovered during the [customs] inspection for reasons unrelated to the [Trump administration’s] Executive Order,” the CBP says in a statement reported by several news outlets, including the Boston Globe.

According to the Associated Press and other media outlets, Iranian state television showed footage today of Dehnavi serving as the head of a student branch of a voluntary paramilitary militia in Iran, several years ago.

The television report also included a comment from Dehnavi, the Associated Press reported: “The topic of our research was health and saving ill people fighting cancer from this dangerous disease, but they didn’t allow us entry, despite, as I...

Officials have detained an Iranian cancer researcher at Logan International Airport in Boston since yesterday (July 10). His wife and three young children travelled from Iran with the scientist, Mohsen Dehnavi, who was hoping to start work as a visiting scholar at Boston Children’s Hospital.

“Boston Children’s hopes that this situation will be quickly resolved and Dr. Dehnavi and his family will be released and allowed to enter the U.S.,” Rob Graham, hospital spokesperson, tells STAT.

Dehnavi’s detention comes after the US Supreme Court upheld last month a twice-revised executive order from President Donald Trump that sought to ban travel to the U.S. for residents of several Muslim-majority countries, including Iran. The Court ruled, however, that current visa holders would be allowed to travel to and from the U.S. and that “a worker who accepted an offer of employment from an American company or a lecturer invited to address an American audience” would also be exempt from the travel ban. This alteration to the Trump travel ban gave international researchers some hope that they’d be able to travel freely to the U.S.

According to the Boston Globe, Dehnavi was entering the U.S. on a J-1 visa—commonly issued to students and other academics studying or working at American universities—that he had secured back in May. It’s not clear whether the travel ban is to blame, but as STAT notes, the president of the president of the National Iranian American Council holds the policy responsible.

A friend of Dehnavi, Boston Children’s researcher Mohammad Rashidan, tells STAT that officials at Logan International told him the Iranian scientist and his family would likely be sent back to Iran today and would need to complete further paperwork before being allowed into the U.S. “I don’t really know what the source of the problem is,” Rashidan, who was supposed to pick up the Dehnavi family at the airport yesterday, tells STAT. “They were so worried.”

Editor’s note (July 13): The headline and subhead of this article were updated to include news of Dehnavi’s return to Iran.