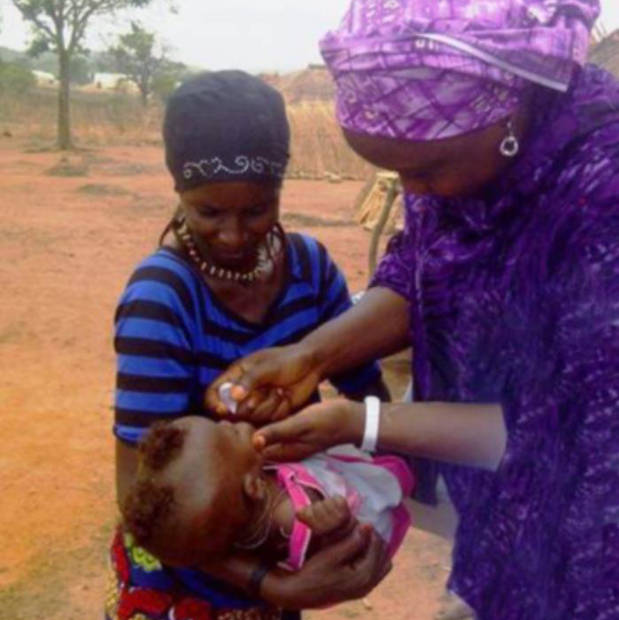 A 3-month-old infant receives the oral polio vaccine in Rugan Fulani, Nigeria CDC PUBLIC HEALTH IMAGE LIBRARYResearchers at Britain’s National Institute for Biological Standards and Control have engineered attenuated strains of the poliovirus that could safer alternatives to those used in today’s inactivated polio vaccine (IPV), whose production involves the growth of highly virulent virus. The new strains, which tested well in mice, could provide a solution to that biosafety risk, according to the scientists, who published their results last week (December 31) in PLOS Pathogens.

“I’m impressed. I didn’t expect this to happen, certainly [not] this quickly,” Neal Halsey, director of the Institute for Vaccine Safety at Johns Hopkins Bloomberg School of Public Health in Baltimore who was not involved in the work, told STAT News.

The global polio eradication campaign has succeeded in dramatically reducing the disease burden—from more than 350,000 cases in 1988, when the...

But the IPV presents its own complications. The vaccine uses an inactivated form of the virus, but it is produced from wild poliovirus that is still highly infectious. “[R]elease from a production facility after eradication could be disastrous,” the British researchers wrote in their paper. “New polio vaccines will be needed to safeguard global eradication.”

So they developed strains of the poliovirus that are stable and extremely attenuated, reducing the risk that they could revert to a replicating form. “[They would pose] negligible risk to the human population should they escape,” the authors wrote in their paper. “At same time, the strains can feasibly be produced on a large-scale and they are as immunogenic as current IPV.” The modified viruses proved immunogenic in culture and, when injected into mice, the new strains generated a protective immune response.

“This is a very important step in terms of trying to have viruses that can be used to produce vaccine without any risk of those viruses causing outbreaks of polio,” Halsey told STAT News. Walter Dowdle, a former deputy director of the Centers for Disease Control and Prevention and a member of a working group that advises the WHO on polio vaccine issues, agreed. “It’s really a step in the right direction. They’ve done a nice job.”