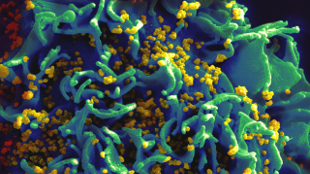 A new “phylogeographic” analysis of HIV suggests that the virus first spread through Africa from the city of Kinshasa, now the capital of the Democratic Republic of Congo (DRC). In the 1920s, the city’s booming population, growing sex trade, and highly traveled railroads likely contributed to the transmission of HIV, according to a study published last week (October 3) in Science.

“We think the virus hit a ‘perfect storm’ of factors that helped it spread,” study coauthor Oliver Pybus of the University of Oxford told New Scientist. “From the virus’s point of view, it hit the jackpot.”

At that time, Kinshasa was part of the Belgian Congo and was known as Leopoldville. The Belgians built a railway system and brought male mine workers to the region, leading to a thriving sex trade.

Although HIV was transmitted to humans from non-human primates at least 13 times, HIV-1 subgroup M represents the only transmission that led to a global pandemic, eventually infecting about 75 million people. This study suggests that subgroup M was prevalent in Kinshasa in the 1920s, and decades of colonial trade enabled it to spread through the region. After the DRC gained independence in 1960, increased mobility brought HIV to other parts of Africa and then to the rest of the world; the virus was first detected in the U.S. in 1981.

“Perhaps the most contentious suggestion is that the spread of the M-group viruses had more to do with the conditions being right than it had to do with these viruses being better adapted for transmission and growth in humans,” Jonathan Ball, a virologist at the University of Nottingham in the U.K. who was not involved in the research, told BBC News. “I'm sure this suggestion will prompt interesting and lively debate within the field.”