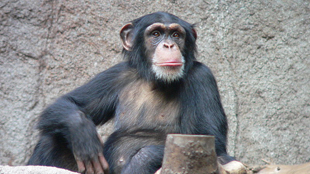 Captive chimpanzees may soon be listed as an endangered species.WIKIMEDIA, THOMAS LERSCH

The US Fish and Wildlife Service (FWS) announced a proposal this week to bump the status of captive chimpanzees from “threatened” to “endangered.” The proposed rule, which is open for public comment over the next 60 days, would limit permits to work with chimpanzees to projects aimed at enhancing the propagation of the species. The wildlife service would also require permits for the sale across state lines of chimpanzee cell lines, tissue, or blood.

"Chimps are an iconic species and among our closest relatives on this planet," said wildlife service director Dan Ashe in a statement. "We hope this will ignite renewed public interest in the plight of chimps in the wild."

The proposed rule change is a response to a petition filed in 2010 by wildlife conservation groups, including the Jane Goodall Institute and the...

Wild chimpanzees have been listed as endangered since 1990, but citing the need for research HIV/AIDS research, captive chimpanzees did not receive the same protection at that time. The United States is currently the only developed country that sanctions the use of chimpanzees in research.

The FWS proposal is the latest setback for chimpanzee research. According to a December 2011 report, the Institute of Medicine recommended a moratorium on the use of the primates in biomedical research. At the time, the U.S. had 937 captive chimpanzees available for research, with 612 held by the National Institutes of Health (NIH). In January, NIH’s Council of Councils called for the retirement to sanctuaries of all but 50 or so of the agency’s chimpanzees.

"Human and chimpanzee lives will be lost as a result of the reclassification,” said Joe Carey, spokesman for the Texas Biomedical Research Institute in San Antonio, which hosts one of the world’s largest research chimpanzee colonies, in a statement. “It is as simple and tragic as that.”