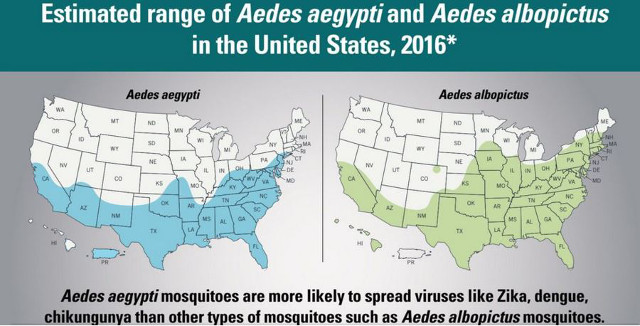 CDCIn February, the Obama administration requested $1.9 billion in emergency supplemental funding to prepare for impending Zika virus outbreaks in the U.S. To date, Congress has not approved the funds.

Meanwhile, local transmission continues in Puerto Rico; virus-transmitting Aedes aegypti mosquitoes have been reported in the U.S. Virgin Islands and American Samoa, and are expected to reach parts of the continental U.S. during the spring and summer months, Obama administration officials told reporters during a press briefing today (April 6). The officials called on Congress to approve the requested emergency spending. In order to respond to ongoing Zika outbreaks and prepare for potential ones, the administration is now repurposing $589 million in health-related funding—including $510 million initially set aside to combat the Ebola epidemic.

“Congress needs to act immediately. We cannot wait,” Shaun Donovan, director of the White House Office of Management and Budget, said during the press briefing....

Diverting funds set aside for Ebola efforts is risky, the officials said, as transmission continues on a smaller scale in West Africa. “We don’t have the option to set one [public health threat] aside in the favor of the other,” US Department of Health and Human Services Secretary Sylvia Mathews Burwell told reporters. Donovan added that along with the requested emergency funding to fight Zika, Congress should act to replenish funds for Ebola spent on Zika-preparation efforts.

To sufficiently respond to local transmission of Zika in Puerto Rico, and prepare for it elsewhere in the U.S., “we need the money immediately,” Burwell told reporters.

Correction (April 7): This article has been updated. The original version misattributed a quote from Burwell (“We don’t have the option to set one [public health threat] aside in the favor of the other”) to Donovan. The Scientist regrets the error.