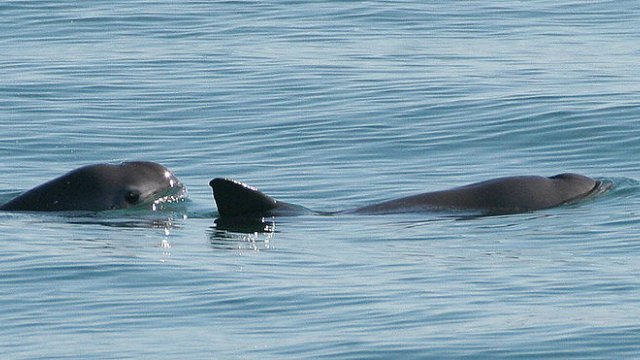 Vaquitas (Phocoena sinus)WIKIMEDIA, PAULA OLSON, NOAAA quartet of female dolphins—Andrea, Fathom, Katrina, and Splash—will use its sea mine-finding skills to hunt down endangered vaquita porpoises in the Gulf of California. The goal is to herd the last of the devastated population of vaquitas into a protected pen. The mammals are frequent victims of illegal fishing.

“The idea is to keep these vaquitas we capture in a safe, restricted space so that we can look at how to reproduce them and eventually recover the population, and eventually release them,” Mexican Environment Secretary Rafael Pacchiano tells the Associated Press.

The US Navy-trained dolphins arrived in Mexico yesterday (October 5), and will start their search next week. The four were chosen for their gentle nature. The Navy Marine Mammal Program trains primarily bottlenose dolphins and sea lions to spot mines and recover equipment.

Vaquitas are elusive, and only about...