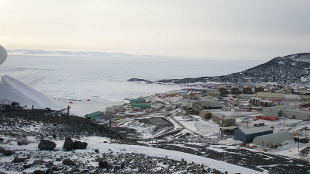 McMurdo Station, AntarcticaWIKIMEDIA, ALAN LIGHTThe National Science Foundation (NSF) has this week released a summary of plans to beef up facilities and improve research in the US Antarctic program (USAP), reported ScienceInsider. The plans have been formulated in response to recommendations made last July by an expert panel led by Norman Augustine, retired chair and CEO of Lockheed Martin, a Bethesda, Maryland-based global security and aerospace company.

The NSF stated that it has already set in motion the process of upgrading its Antarctic facilities at McMurdo Station and Palmer Station, where it plans to build an improved pier to allow direct access to the base by large ships, currently deterred by an underwater rock ledge. The agency also said it will be making efforts to add more robotically operated vehicles to its overland fleet to aid resupply operations.

The NSF is working with the US Coast...

Along with the logistical improvements, the NSF has also agreed to embrace the panel’s suggestions to introduce stricter rules to ensure research costs don’t spiral out of control. From now on, the agency will force Antarctic scientists and review panels to thoroughly consider all the costs and logistical ramifications of research projects, including how well instruments will perform in the field, before granting funds.