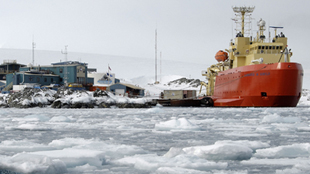 The research vessel Laurence M. Gould at the Palmer Station pier.NSF/USAP ANDREW V. WILLIAMSA White House report released in May assessing the state of federal science vessels reveals an ageing fleet that has been decimated by withering budgets and rising operating costs. Several ships have been sold in the past decade, and dozens more will be sold or retired in the coming decades, with only a small handful of ships set to replace them.

“The community is deeply concerned that the ability to go to sea will be significantly reduced in the next decade, as research ships are retired or laid up,” Mark Abbott, dean of the College of Earth, Ocean, and Atmospheric Sciences at Oregon State University in Corvallis, told Nature.

Currently, 42 research vessels are deployed in the world’s oceans and the Great Lakes to carry out a wide variety of scientific missions for...

The White House report states that efforts to modernize the fleet will continue through 2022. Over that time, six vessels will be added to the fleet, and nine will be retired. Three ships, including the polar research vessel Sikuliaq, will be operational as early as 2014. However, beyond 2022, “the Fleet will experience a reduction in size and capacity due to several vessels nearing their projected end of service life,” according to the report.

The overall decrease in available ships will be offset somewhat by technological and design improvements that will increase futures ships’ capacity to operate in multiple environments and carry out a broader range of missions. Such flexibility has cost-saving benefits, reversing the trend for missions that are “scheduled onto alternative platforms that are more costly in an effort to complete the project within the timeline required,” according to the report.

“With the introduction of highly advanced ships and the retirement of older, less-capable vessels, the Fleet will become more efficient and capable of supporting stakeholders’ demands over the next decade,” says the report.

Correction (June 12): The original version of this story indicated that the US research fleet was likely to shrink to a third of its present size in three decades when, in fact, this could happen in as little as two. The Scientist regrets the error.