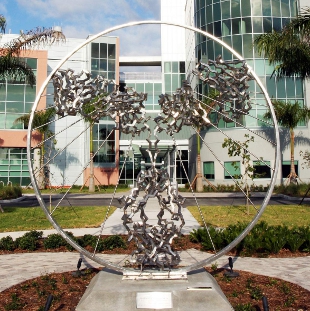 Julian Voss-Andreae's "Angel of the West" adorns the campus of The Scripps Research Institute FloridaWIKIMEDIA, JULIANVAThe University of Southern California may acquire or merge with the Scripps Research Institute, according to unnamed Scripps researchers who spoke with the San Diego Union-Times, which broke the story. The private institutions themselves were less specific about a possible move. “The University of Southern California (USC) and The Scripps Research Institute (TSRI) are discussing the possibility of a relationship that would enhance the missions of both institutions,” Michael Marletta, president and CEO of TSRI, and Elizabeth Garrett, USC provost and senior vice president for academic affairs, said in a joint statement. “TSRI and USC have a shared commitment to academic excellence that will result in meaningful breakthroughs to improve health and well-being.”

Such a merger would be virtually unprecedented. “I’ve never heard of quite anything like this,” medicinal chemist Derek...

The La Jolla, California-based TSRI, which specializes in chemistry, stem cell research, and molecular biology, announced an expansion into Florida in 2003, with a campus in Jupiter. The Sunshine State offered TSRI hundreds of millions of dollars in incentives to open shop in Palm Beach County. The news that USC and TSRI are negotiating some sort of joint relationship has angered at least one Florida politician. “I am outraged by this announcement and find it unacceptable based on several factors, including a recent large state appropriation without any of Scripps’ people even bothering to mention that negotiations have been ongoing for some time,” former GOP congressman Mark Foley told The Palm Beach Post. “I think this deserves an investigation and a freezing of the state monies before a check is written.”

Both USC and TSRI attract millions of dollars in funding from the National Institutes of Health (NIH) every year. But TSRI researchers rely almost wholly on NIH, which has grappling with flat budgets and a decrease in grants for a number of years. It employs nearly 2,900 scientists and other employees and had a $398 million budget in 2012, according to the Los Angeles Times.

However, the LA Times quoted “officials close to the situation” as saying that a potential deal is not imminent.