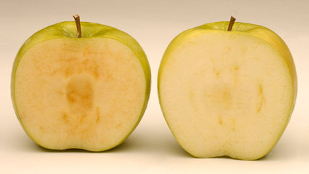 An Arctic Granny apple (right) resists browning after eight hours exposed to air, as compared with an unmodified variety (left).OKANAGAN SPECIALTY FRUITSUpdate (January 20, 2017): The first genetically modified apples, which are resistant to browning, may be available at a limited number of stores in the Midwest as early as February, according to statements made by Arctic company founder and president Neal Carter in an interview with Capital Press published January 9.

The fruit, which have been genetically engineered to produce less of an enzyme that causes browning, were approved by the US Department of Agriculture in February 2015 (see story below) and deemed safe by the US Food and Drug Administration one month later. According to Carter, the Arctic brand Golden Delicious apples will be sliced and packaged in British Columbia and sold in 10 stores in February and March. “We’re very optimistic with respect to this...

Canadian company Okanagan Specialty Fruits got a nod of approval from the US Department of Agriculture (USDA) last week (February 13) to commercially grow its browning-resistant apples, which resist browning longer than conventional apples after being sliced or bruised. According to the agency, the so-called Arctic apples, which are genetically engineered to have reduced production of a browning-causing enzyme, pose no risk to other plants.

But with a trait aimed at pleasing consumers, rather than farmers, perhaps the Arctic apples will have a fighting chance. The USDA announcement follows on the heels of its approval of a genetically engineered browning-resistant potato from the J.R. Simplot Company last November. The US Food and Drug Administration is still reviewing both genetically altered produce products, The Wall Street Journal reported.