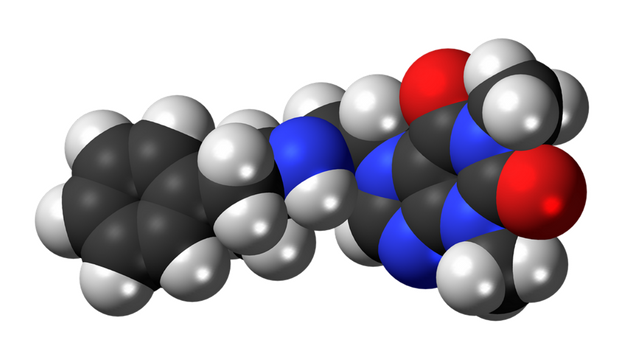 Captagon moleculeWIKIMEDIA, JYNTO In a report published today (August 16) in Nature, researchers uncover the mechanisms by which the psychoactive and addictive drug fenethylline, trade name Captagon, exerts its potent stimulating effects. Essentially, one component of the drug, theophylline, boosts the effects of another, amphetamine.

In exploring fenethylline’s mode of action, the researchers came upon a method to vaccinate against the drug in mice using small, antibody-eliciting molecules called haptens that target the drug’s chemical components. Once antibodies for a specific chemical are prompted by a vaccine, they bind to and prevent it from interacting with its receptors in the body, thus preventing the effects of the drug driven by that chemical.

According to Reuters, the drug initially sparked Janda’s interest because of its use by Islamic State jihadists. According to the San Diego Union-Tribune, “Syrian civil war combatants and Islamic State terrorists have reportedly used the drug to boost their fighting ability and to lessen fear.”

Janda’s main goal was not to develop a vaccine for fenethylline, Reuters reports. Rather, he and his team used the approach of systematically blocking each drug constituent with haptens to better understand how it works. “But if there was an interest in developing it as vaccine for humans, we could do that,” he adds.