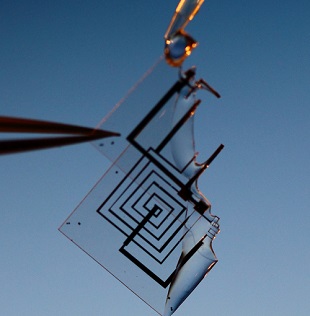 A biodegradable chip developed by the Rogers Lab in 2012UNIVERSITY OF ILLINOIS AT URBANA-CHAMPAIGNBiodegradable components of temporary implantable devices have been in the works for several years. Now, a team led by John Rogers of the University of Illinois at Urbana-Champaign has developed a biodegradable battery source for these devices, according to a study published last week (March 20) in Advanced Materials.

This advance follows on the heels of biodegradable silicon chips that Rogers’s team developed in 2012. The chips can monitor temperature and transmit the data via radio signals or heat up enough to prevent infections. But they rely on external power sources. “Almost all of the key building blocks are now available” to produce self-powered, biodegradable implants, Rogers told Nature News.

The biodegradable battery uses magnesium foil anodes, cathodes of iron, molybdenum, or tungsten, and a phosphate-buffered saline solution electrolyte. All these compounds are...

“This is a really major advance,” Jeffrey Borenstein, a biomedical engineer at the nonprofit Draper Laboratory who was not involved in the research, told Nature News. “Until recently, there has not been a lot of progress in this area.”