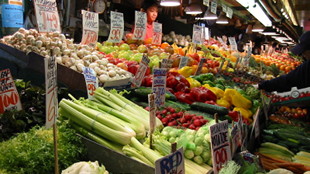 WIKIMEDIA, ERIC HUNTUsually, scientists only become interested in microorganisms on food if they’re pathogenic. But produce is covered in all kinds of bacteria, many of them benign. A study published in PLOS ONE last week (March 27) describes the bacteria ordinarily present on fruits and vegetables in grocery stores.

The researchers shopped at three difference supermarket chains in Boulder, Colorado, for 11 types of produce, including apples, lettuce, mushrooms, spinach, and sprouts. For nine of the vegetable types, sprouts excluded, they sampled both conventional and organic varieties.

Identifying bacteria species by sequencing 16S ribosomal RNA genes, the team found that different produce types have their own characteristic microbial inhabitants, though some vegetables, such as sprouts, spinach, lettuce, tomatoes, peppers, and strawberries, had a more similar microbial makeup to each other than to the others. These produce items were more likely to have microbes of the Enterobacteriaceae family, for example,...

Conventionally grown produce also tended to have more microbes of the Enterobacteriaceae family than organic produce, although this did not necessarily mean the organic farming methods had caused the difference. “We can’t say that this is attributable to the farming practice itself,” coauthor Jonathan Leff, a biologist at the University of Colorado, Boulder, told NPR’s The Salt. “It could be transport and storage.”