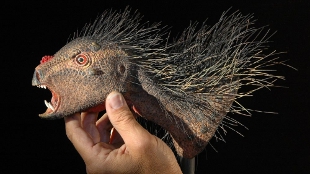 Pegomastax africanus model, photo and sculpture by Tyler KeillorA dinosaur roughly the size of a house cat sported sharp fangs and a beak, which researchers think were more likely used to scare off predators than to catch prey. The study, reported this week (October 3) in the journal ZooKeys, suggested that species with seemingly carnivorous dentition may, in fact, be vegetarian.

“Imagine a light, fleet-footed chicken with fangs and spines,” author Paul Sereno, from the University of Chicago, told The Chronicle of Higher Education. “That’s why I keep calling them little punks.”

Sereno also suspect his  “punks,” also known as Pegomastax africanus, to have had quills like a porcupine and a beak like a parrot. The dinosaur was first found near the border of Lesotho and South Africa and stored in Harvard University’s archives until Serono took another look, reported LiveScience.

“Contrary to what many people...