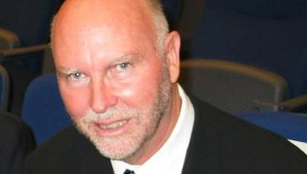 Craig Venter. Wikimedia Commons, Margoz Craig Venter, the geneticist who made headlines in 2010 when he and colleagues created the first self-replicating cell with a synthetic genome, is on to his next big idea: a 3D printer for DNA, which could one day allow people to download, print, and inject vaccines at home.

Speaking at the inaugural Wired Health Conference in New York City this week (October 16), Venter said that his team of scientists at the J. Craig Venter Institute in Rockville, Maryland, are already testing a version of his digital biological converter—designed for what Venter calls “biological teleportation”—according to a report in Wired Science.

“Imagine being able to download a vaccine or your medicine on your computer at home," Venter said a week earlier (October 8) at The Atlantic Meets the Pacific forum in La Jolla, California, as reported in The Atlantic. "That's the not-to-distant future,...

The idea came from Venter’s experiences working with the Mayor of Mexico City during the H1N1 outbreak in 2009. Efforts to halt the spread of the virus were delayed because the government could not authorize sending the virus out of the city due to safety risks. If they had been able to digitize the virus, Venter realized, it could have been emailed to labs around the world, where scientists could have more quickly created a vaccine.

Venter conceded, however, that regulators would likely be reluctant to give the green light to DNA printers. The ability the download and print genetic material, such as vaccines, could easily be abused, leading to the creation of dangerous bioweapons, such as retroviruses. Regulators will also have to make sure that the printing is extremely accurate, because any small changes could lead to proteins working in unforeseen, potentially dangerous, ways.