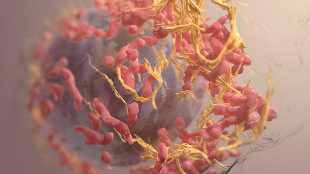 WIKIMEDIA, SRIRAM SUBRAMANIAM, NATIONAL CANCER INSTITUTEFor the first time, researchers have shown that melanoma patients injected with a virus-based immunotherapy respond better than patients given an immune-boosting cytokine. The therapy, talimogene laherparepvec (T-Vec), is based on a modified herpesvirus that is injected directly into tumors where it replicates and recruits an immune response that kills the cancerous cells.

“Previous studies have shown T-Vec could benefit some people with advanced skin cancer, but this is the first study to prove an increase in survival,” Hayley Frend, science information manager at Cancer Research UK who was not involved in the study, told BBC News. “The next step will be to understand why only some patients respond to T-Vec, in order to help better identify which patients might benefit from it.”

The Amgen-sponsored study involved 436 patients with stage III or IV melanoma. They were randomly assigned to receive T-Vec or...

Already, Amgen has applied for approval for T-Vec by the US Food and Drug Administration (FDA) and the European Medicines Agency. An advisory panel to the FDA voted in favor of approving the therapy in April.

“The next big frontier will be to combine this with existing immunotherapies,” study coauthor Kevin Harrington at the Institute of Cancer Research in London told The Washington Post. “There’s a strong rationale that other drugs on the market could act synogistically with ours.”