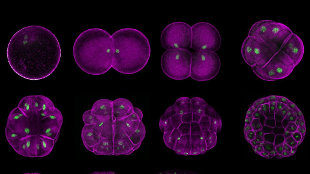 FLICKR, ELIFESome 9 percent of the human genome of is viral origin, and while the genetic material was long dismissed as useless junk DNA, recent research has demonstrated that many of these sequences are not always inactive. One of these so-called endogenous retroviruses, HERVK, is apparently expressed in human embryos, according to a study published this week (April 20) in Nature, and appears to play critical roles in viral defense and early development.

“The cells were full of viral [HERVK] protein products, some of which had assembled to form viral-like particles,” coauthor Joanna Wysocka of Stanford University told New Scientist of the three-day-old embryos she and her colleagues investigated. The viral products included a protein that prevented other viruses, such as influenza, from penetrating the embryo and coordinated the translation of certain host RNAs.

“[The work] shows that the protein products of a relatively ‘recent’ retrovirus integration”—HERVK took...