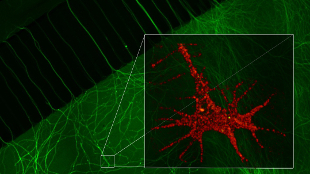 Dorsal root ganglia explant grown ex vivo; Insert: Rabies virus (green) binds the p75 neurotrophine receptor (red) at the tip of a sensory axon.ERAN PERLSON ET AL.The saliva transmitted by the bite of a rabid animal allows the rabies virus to enter a victim’s muscle tissue. But to cause its trademark symptoms, including violent behavior, rabies must first reach the brain.

The virus begins its journey in the peripheral nervous system by traveling along axons. In a study published last week (August 28) in PLOS Pathogens, a team led by investigators at Tel Aviv University in Israel showed that p75 nerve growth factor receptor, or p75NTR, plays a critical role in viral transport.

Tel Aviv’s Shani Gluska, Eran Perlson, and their colleagues tracked fluorescently labeled viral particles moving along mouse axons grown in specialized microfluidic chambers. Although p75NTR is not required for the virus to travel along...

The researchers also found that rabies viral particles co-localized and moved together with an acidic marker, suggesting that the viral particles may be transported within membrane compartments. Low pH is known to change the conformation of the viral glycoprotein, which may regulate transport.

The results point to a potential therapeutic target, virologist Monique Lafon of the Pasteur Institute in Paris who was not involved in the work told Science News.