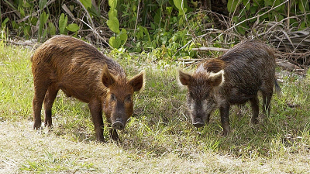 Wild pigs in Florida, where their populations have boomedWIKIMEDIA, NASAVirginia, a state that already allows hunters to kill feral pigs in any manner on any day except Sunday, is taking further steps to curb populations of the invasive species by forming a statewide taskforce to address the problem. Wild pigs, which can include wild boar, feral pigs, and hybrids of the two, currently roam at least 20 Virginia counties and number from 2,500 to 3,000, according to the state’s most recent estimate. And as they do in several other states where wild pig populations have exploded in the past 20 years, the animals damage native ecosystems and make it easier for other invasive species, such as plants that take advantage of disturbed habitats, to take hold. “As far as ecological damage, there is probably not a worse animal that’s out there,” Mike Dye, Virginia Department of Game and...

With voracious appetites, formidable tusks, and prodigious mating habits, wild pigs can transform native ecosystems in short order. For example, by clearing native plants and disturbing soil, they can make fertile habitats for invasive plants such as Japanese honeysuckle, which strangles trees with fast-growing vines. “The pigs create good habitat for the plants to invade. Deer already do that; pigs will add another layer,” Jim McGlone, an urban forestry conservationist for the Virginia Department of Forestry, told the Post. “They’re already doing a number on the environment.”

Wild hogs already number in the millions in Texas, while Florida, Georgia, and North Carolina also harbor large and growing populations of the pests. The invasive species cause an estimated $1.5 billion in damage nationwide annually.