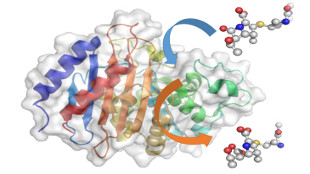 A carbapenem molecule enters a beta-lactamase enzyme (blue arrow), which alters its structure. The ineffective molecule is then released (orange arrow).UNIVERSITY OF BRISTOL

Carbapenems, beta-lactam antibiotics similar to penicillin, have been used for more than 30 years as treatments of last resort against drug-resistant strains of Escherichia coli, Pseudomonas aeruginosa, and other pathogens. But now, bacterial resistance against carbapenems is also on the rise.

Researchers at the University of Bristol in the U.K. have applied an in silico method to model how carbapenems interact with bacterial beta-lactamase enzymes. The technique, reported this month in Chemical Communications, may aid both the development and deployment of carbapenem antibiotics.

Resistance to penicillins, carbapenems, and other beta-lactam antibiotics depends on how quickly a bacterial beta-lactamase releases the broken-down antibiotic. Because carbapenems generally form more stable complexes with beta-lactamases, they act as enzymatic inhibitors. A simulation method called quantum mechanics/molecular mechanics...

“We’ve shown that we can use computer simulations to identify which enzymes break down and spit out carbapenems quickly and those that do it only slowly,” study coauthor Adrian Mulholland said in a press release. “This means that these simulations can be used in [the] future to test enzymes and predict and understand resistance. We hope that this will identify how they act against different drugs— a useful tool in developing new antibiotics and helping to choose which drugs might be best for treating a particular outbreak.”