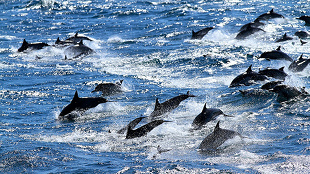 FLICKR, LOWJUMPINGFROGA spate of bottlenose dolphin deaths along the Eastern seaboard is likely due to a morbillivirus, according to the National Oceanic and Atmospheric Administration (NOAA). The virus is the same one that killed more than 700 dolphins from 1987 to 1988, The Washington Post reported.

More than 300 dolphins have washed up dead between New York and North Carolina since July. In an average year, only around 36 dolphins end up stranded along the East Coast. Eleven cases of cetacean morbillivirus infection were recently confirmed by genetic sequencing, NOAA said, and 32 of 33 dolphins tested using various methods are confirmed or suspected to have been infected with morbillivirus.

Jerry Saliki, a virologist at the University of Georgia, blamed reduced immunity to the virus among dolphins. “When the collective immunity drops below a certain, critical point, which we don’t really know for marine mammals, then the whole population...

Related to human measles, morbillivirus can be fatal to dolphins by weakening their immune systems and allowing opportunistic agents to invade. While cetacean morbillivirus does not pose a direct threat to humans, authorities are warning people to stay away from stranded dolphins because of the risk of dangerous coinfections. Another marine expert warned the public to stay away from dolphins struggling in the surf, as they attract sharks.

Teri Rowles, coordinator of the Marine Mammal Health and Stranding Response Program at NOAA, said that based on the 1987-1988 outbreak, she expects a far greater dolphin death toll to come. “We’re expecting that if indeed this plays out the way that that die-off occurred, that we’re looking at mortalities being higher and morbillivirus spreading southward, and likely continuing to the spring of 2014,” she said in a conference call.