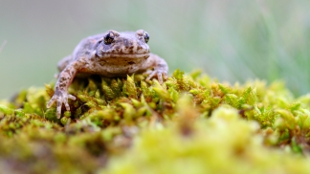 The common midwife toad (Alytes obstetricans) is suffering major losses to the virus in Spain's Picos de Europa National Park.WIKIMEDIA, FELIX REIMANNAmphibians the world over have had a rough go of it in recent years. Frogs throughout the new world have fallen prey to the rapacious chytrid fungus. And amphibians are notoriously sensitive to water and air pollution. Now, European amphibian communities are under attack from a new threat—a type of ranavirus (RV) called common midwife toad virus (CMTV). The most recently documented victims of the virus are amphibians inhabiting the relatively pristine confines of Picos de Europa National Park in northern Spain. Researchers working there have determined that a suite of amphibian species, including the common midwife toad (Alytes obstetricans), the common toad (Bufo bufo), and the alpine newt (Mesotriton alpestris) are being decimated by CMTV. They published...

Amphibians at a nearby site, called Galicia, are being infected by a related ranavirus virus, Bosca's newt virus (BNV). “It is a pretty graphic disease with a high kill-rate,” first author Stephen Price of University College London told BBC News. “We’ve shown these viruses have caused simultaneous declines in several species of host.” In the case of BNV, this includes a snake that Price and his colleagues saw become infected with the virus after eating diseased amphibians.

RVs have been cropping up in Europe for the past decade, but they’ve never been tied to mass die-offs like those Price and his colleagues have documented in Spain. The researchers used PCR-based techniques, targeted sequencing, and comparative genomics to determine the nature of the viruses striking the Spanish amphibians. But the source of the pathogens and its spread are still unanswered questions. “I am fascinated and worried about yet another challenge to amphibians and reptiles around the world,” Jesse Brunner, who was not involved with the research in Spain but studies RVs at Washington State University told Science.