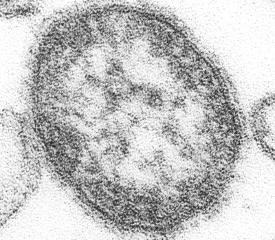 A single virion of measles virus is about 100-200 nm in diameter.WIKIMEDIA, CYNTHIA S. GOLDSMITH, CDCStefan Lanka cannot welch on his pledge to pay €100,000 (about $106,300) to anyone who can prove that measles is a virus. Lanka, a biologist who is against vaccines, made the offer on his website in 2011. German doctor David Barden took him up on it, emailing Lanka studies showing that measles is indeed a virus. But Lanka refused to pay, and Thursday (March 12) a regional court in southern Germany sided with Barden, ordering Lanka to pay up. Lanka told BBC News that he plans to appeal the ruling.

The courtroom drama unfolded as Germany grapples with a measles outbreak that has sickened more than 22,000 across Europe since 2014, according to the World Health Organization. Last month, an 18-month-old boy died of the disease in Berlin.