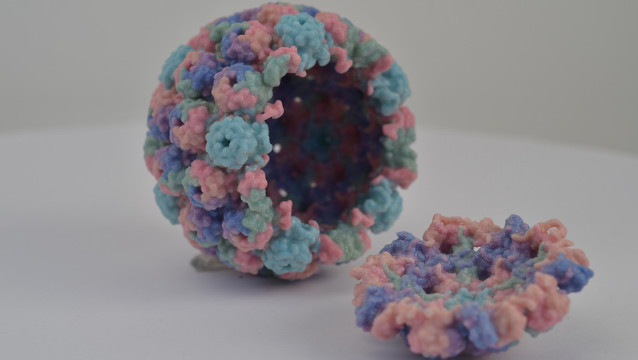 FLICKR, NIAIDA person’s history of viral infection may be a useful forensics tool, according to a study published last week (November 11) in the Journal of Cellular Physiology. By looking in healthy men’s semen for JC polyomavirus, which infects around 60 percent of people during childhood and remains latent throughout a person’s lifetime, researchers at Ferrara University in Italy demonstrated that viral genotypes correlated with each volunteer’s continent of origin.
“There are some [JC polyomavirus] genotypes that are more frequent in Europe, and others more frequent in America, Asia, or Africa,” said Ana Miguel Matos, a virologist at the University of Coimbra in Portugal, who was not involved in the work. Miguel Matos said each of the eight JC polyomavirus genotypes have long been associated with certain geographical areas.
Most people are infected with JC polyomavirus during childhood, and unless their immune systems become compromised,...
As infected individuals reach their 20s and 30s, Miguel Matos said, viral particles are shed through urine and semen.
The Ferrara University team sequenced JC polyomavirus strains in semen samples collected from 47 male volunteers—35 from Europe, nine from Africa, and three from Asia. As expected, most the samples from Europeans carried one genotype, called 1A, while samples from Africans were equally likely to be genotype 1A or another, called 3A. Two of the three samples from Asian donors carried yet another genotype: 2D1. In their paper, the authors suggested that a similar  technique could be used to narrow in on suspects of sexual crimes.
Miguel Matos noted that genotype alone is unlikely to be specific enough to accurately pinpoint which continent someone came from, since none of the genotypes are restricted to an individual area. “If I found 3A in Portuguese people, I cannot assume the people came from Africa,” she told The Scientist.
“People can acquire the virus from different routes,” added Hampson. One way to increase the technique’s accuracy, he said, would be to search for other viruses that also have geographical associations, such as BK polyomavirus. Larger studies would also be needed before JC polyomavirus could  be used as a forensic tool. Though interesting, said Hampson, the results of the present study represent “a toe in the water.”