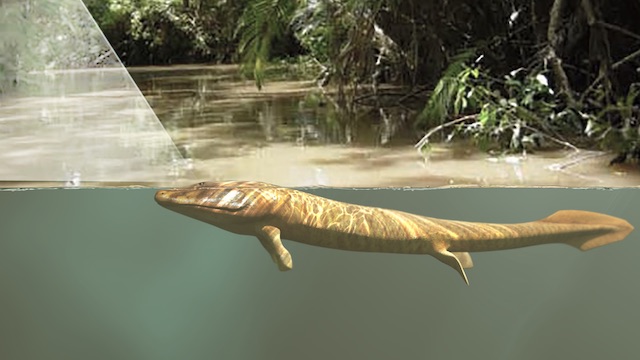 A 3-D model of a fishapod, the Tiktaalik MALCOLM MACIVER, NORTHWESTERN UNIVERSITY

During the Devonian period, around 385 million years ago, our aquatic ancestors evolved to live on land. While most scientists suspect this transition was spurred by the evolution of fins to limbs, it may have been changes in the eyes that brought the early fish out of the water, according to a study published Tuesday (March 7) in PNAS.

Malcolm MacIver, a neuroscientist and engineer at Northwestern University, and colleagues made this discovery while investigating the fossilized skulls of 59 fish, tetrapod, and fishapod (intermediates between fish and tetrapod) species from the Devonian period. By measuring eye socket size, they discovered that these ancient creatures’ eyes may have nearly tripled in size before the transition from water to land occurred. Bigger eyes would had made little difference in visual range underwater, the authors write, but it...

“We found a huge increase in visual capability in vertebrates just before the transition from water to land,” MacIver said in a statement. “[We think] that maybe it was seeing an unexploited cornucopia of food on land—millipedes, centipedes, spiders and more—that drove evolution to come up with limbs from fins.”

“This study helps explain how fishes built for life in the water could be lured to shore without losing their competitive edge along the way,” Lauren Sallan, a paleobiologist from the University of Pennsylvania, who was not involved in study, told The Atlantic.

Long-range vision may have also allowed our early ancestors to develop more complex cognitive abilities. “Maybe having this expanded sensing volume allowed us to break the knee-jerk connection between sensing and moving, and decouple thoughts from action,” MacIver told The Atlantic. “Now you’re choosing the best thought for your environment, which looks like a kind of proto-consciousness.”