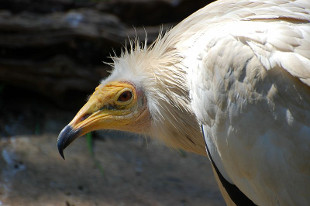 FLICKR, STEVEN SNODGRASSAfrica has 11 vulture species, of which seven are headed for extinction, according to an assessment released this week (October 29) by BirdLife International, in partnership with the International Union for Conservation of Nature (IUCN). The work is part of a larger effort to catalog the statuses of bird species worldwide.

Six of the vulture species from Africa have been updated to either “endangered” or “critically endangered” status on the IUCN Red List. These are the hooded vulture (Necrosyrtes monachus), white-backed vulture (Gyps africanus), white-headed vulture (Trigonoceps occipitalis), Rüppell's vulture (G. rueppellii), cape vulture (G. coprotheres), and the lappet-faced vulture (Torgos tracheliotos). Another species, the Egyptian vulture (Neophron percnopterus), was classified as endangered in 2007.

“Vultures and other birds play a critical role in maintaining healthy ecosystems,” said Simon Stuart, chair of the...

The three main causes driving the vulture population declines appear to be: poisoning as collateral damage from efforts to kill mammalian predators that feed on livestock; killing for the use of vulture parts in traditional medicine; and targeting by poachers to stop the birds’ circling from alerting officials to an illegal big-game kill, according to BirdLife.

“As well as robbing the African skies of one of their most iconic and spectacular groups of birds, the rapid decline of the continent’s vultures has profound consequences for its people—as vultures help stop the spread of diseases by cleaning up rotting carcasses,” Africa Program Director Julius Arinaitwe of BirdLife International said in the news release.