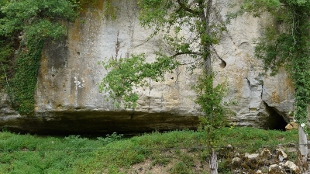 Over the years, archaeologist Randall White of New York University and his colleagues have discovered various artistic items of southern France’s Abri Castanet, a shallow cave in the Vexere valley, including ornamental snail shells and engraved limestones. But the researchers were unable to date the art due to a lack of organic matter. So when, in 2007, the team discovered a large block of limestone with paintings of what look like a female’s vulva that had fallen from the cave ceiling in an area with numerous animal bones, suggesting they dated to around the same time period, they sent the samples to the University of Oxford for radiocarbon dating. The results came back dating the bones to somewhere between 36,000 and 37,000 years ago, making them as old, or older, than the paintings of lions and other animals in southern...

The researchers, who published their findings yesterday (May 14) in the Proceedings of the National Academy of Sciences, suggest that this date likely also applies to the other vulva-like art previously found in the cave. “The fact that the most recognizable image on the newly discovered surface falls broadly within the range of ovoid forms traditionally interpreted as vulva leads us to suppose that the above dates apply to other such images from Castanet, many of which were located within a few meters of the engraving described here,” they wrote.

The images also differ greatly from the drawings at Chauvet, such as the fact that they are displayed in the areas of the cave used for sleeping and eating, as opposed to deeper areas beyond the prehistoric humans’ living space, suggesting regional differences in artistic traditions. “The vulvar tradition in the Vézère Valley seems to constitute a distinct regional variant within a mosaic of graphic and plastic expression across Europe in the Early Aurignacian,” the authors wrote.