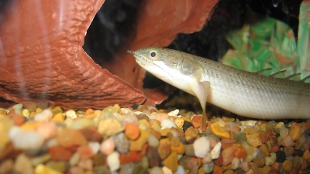 The Senegal bichir (Polypterus senegalus)WIKIMEDIA, MITTERNACHT90Raising Senegal bichir (Polypterus senegalus), or dinosaur eels, on land lends the semi-terrestrial fish physiological and behavioral changes that may reflect similar changes experienced by extinct species that made the transition from aquatic to terrestrial habitats millions of years ago, according to a study published in Nature this week (August 27).

As a postdoc at McGill University in Montreal, Emily Standen—who’s now based at the University of Ottawa—raised 111 two-month-old bichirs in laboratory environments that forced them to use their fins to walk on a substrate rather than propel them through the water. After raising the fish in such conditions for eight months, she compared the experimental animals’ development to that of bichirs of the same age that she had reared in aquaria. “The bones in the pectoral girdle—the bones that support the fins—changed their shape,” Standen told The...

The results may offer a glimpse into some of the developmental changes that occurred in fish species, such as the extinct Eusthenopteron, which likely made the transition from aquatic to terrestrial life more than 300 million years ago. “The results cast light on a factor that may have had a part in the origin of tetrapods,” Per Ahlberg, a paleontologist at Uppsala University in Sweden who was not involved in the study, told Science.

The changes seen in the land-reared bichirs, which breathe air and walk across land for short distances in their native habitats, might model the propensity for physiological changes—termed “developmental plasticity”—that attended the ancient fish species as they started living in terrestrial environments for extended periods. “Developmental plasticity can facilitate the first couple of stages that can ultimately lead to a massive evolutionary transition,” Armin Moczek, an evolutionary developmental biologist at Indiana University, Bloomington, who was not involved with the work told Science.

Standen told The Verge that she now plans to rear the fish in terrestrial environments for longer periods of time to monitor changes in the animals’ physiology, especially in their muscles. “It’s quite possible that larger changes would occur if we kept them on land for longer,” she said. “The big dream is to do this over several generations.”