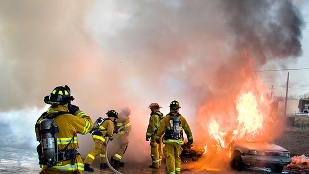 Spot from a car fire in ColoradoFLICKR CREATIVE COMMONS, AMAGILL

A hypothetical war between India and Pakistan would decrease the yield of staple crop around the world, according to a study published in the journal Climate Change.

Researchers from the University of Wisconsin-Madison and Rutgers calculated impact of 50 nuclear weapons used by each of the two countries, and found that the soot from fires started by the bombs would travel to neighboring countries and block the sunlight, smothering fields of crops around the world. The authors were surprised to see such a large effect “from a war with 50 small nuclear weapons per side— much, much less than 1 percent of the current nuclear arsenal,” Alan Robock of Rutgers University said in a press release. Indeed, according to the model, the soot would reduce corn and soy yields as much as 20 to 40 percent, respectively,...

“Hopefully this will never happen,” Mutlu Ozdogan from the University of Wisconsin-Madison said in the press release. “But if it happens, if the prospect is there, these are some of the results that people could expect.”