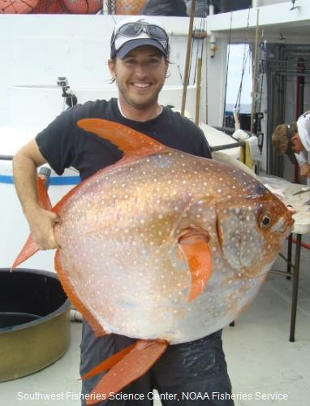 Biologist Nick Wegner, coauthor of the Science paper, holding a recently captured opahWIKIMEDIA, USA NOAA FISHERIES SOUTHWEST FISHERIES SCIENCE CENTERFish are generally a cold-blooded set. No species had been documented to stray very far from ecothermy, which makes the body temperatures of most fish—along with reptiles, amphibians, and insects—track with environmental conditions. But researchers have determined that one species of fish, the opah, or moonfish (Lampris guttatus), is warm-blooded and can regulate its body temperature even at the frigid depths of its deep-sea habitat.

The opah was long considered a slow-moving fish, like many of the other species that inhabit the deep sea. But scientists with the National Oceanic and Atmospheric Administration’s Southwest Fisheries Science Center (SFSC) reported in Science today (May 15) that the species can keep its body temperature at about 5° C warmer than the surrounding water by pumping its slender pectoral fins,...

“Before this discovery I was under the impression this was a slow-moving fish, like most other fish in cold environments,” coauthor and SFSC biologist Nicholas Wegner told BBC News. “But because it can warm its body, it turns out to be a very active predator that chases down agile prey like squid and can migrate long distances.”

Wegner first suspected the opah’s endothermy after dissecting several species his colleagues had caught on a collecting trip off the coast of California. Noticing the intricate structure of the fish’s gills, Wegner and his colleagues decided to sample more opahs, measuring body temperatures of fish they caught at sea and inserting thermometers into some specimens before releasing them still attached to fishing gear. The team recorded consistently higher temperatures in the opah’s brain, muscles, and hearts.

Although tunas and some shark species have been shown to be “regional endotherms” because they can temporarily warm their swimming muscles for bursts of predatory speed, they are not able to maintain their hearts at temperatures higher than the surrounding seawater. Likewise, swordfish, marlins, and sailfish can temporarily warm their eyes and brains, but not their hearts. “That’s why opah can stay at depth,” Wegner told National Geographic’s Not Exactly Rocket Science. “These guys are specialized for living deeper than those other predators.”

“It’s a remarkable adaptation for a fish,” Diego Bernal, a University of Massachusetts, Dartmouth, fish physiologist who was not involved in the study, told Science.