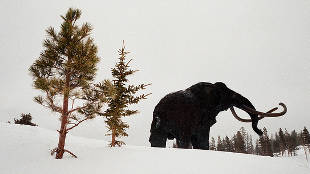 FLICKR, BENNYResearchers once blamed human hunting for the disappearance of mammoths and other giant mammals more than 20,000 years ago, but a new study based on DNA extracted from ancient fossils suggests that a warming climate may be to blame. The results were published results in Science this week.

Paleogeneticist Alan Cooper of the University of Adelaide in Australia and his colleagues analyzed the genetic material from dozens of megafauna fossils from North America and Eurasia to determine how the populations changed over time. They found that “invisible extinctions”—in which the fossil record looks continuous but in fact species were dying out while being replaced by morphologically similar cousins—were relatively common: the steppe bison, the cave bear, and the giant short-faced bear were all replaced by genetically distinct populations.

The team then analyzed ice cores from Greenland and marine sediments in Venezuela to reveal clues about the ancient climate, then compared the timing of these changes to the shifts in the megafauna populations. Sure enough, these invisible extinctions corresponded with periods of sudden warming and cooling called interstadials. Interestingly, the species’ declines and disappearances seemed to coincide with the periods of warming, not cooling—even extended periods of cold such as the last ice age—as researchers had once assumed. Two periods—one about 34,000 years ago and another between 28,000 and 30,000 years ago—seemed particularly hard on the megafauna, the researchers found.

“People haven’t ever correlated the radiocarbon data on extinct animals to the paleoclimate data in much as detail as these [researchers],” David Steadman, a paleontologist at the Florida Museum of Natural History in Gainesville who was not involved in the work, told Science. But Steadman cautioned against reading “too much into the completeness of the fossil record.” A population may appear to have disappeared when, in fact, paleontologists are simply missing fossils from a particular location or time period, he noted.

Moreover, Steadman said he doesn’t think that all the blame can be placed squarely on climate change. Humans were likely still a driving force in the extinction of many megafauna species, he said. Adrian Lister, an evolutionary paleontologist at the Natural History Museum in London who was not involved with the work, said he thinks it’s probably both. “There are still people who are putting all the blame on humans, and some blame climate,” he told Science. “But a growing number see it as it a synergistic effect, a powerful combination of those two factors happening at once.”