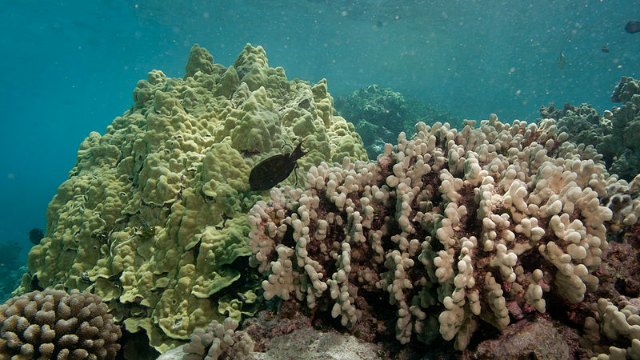 WIKIPEDIA, US FISH AND WILDLIFE SERVICE-PACIFIC REGIONFrom 2014 to 2016, nearly 50 percent of the corals in Hanauma Bay Nature Preserve on Oahu, Hawaii, bleached and almost 10 percent of them died, researchers reported today (May 30) in PeerJ. The authors conclude that warm temperatures were responsible for the die-off, rather than other potential factors such as human use.

“This is a protected place and yet it’s not able to escape the temperature,” coauthor Angela Richards Donà of the Hawaii Institute of Marine Biology tells The Guardian. “It was very distressing to see. It does not bode well for Hawaii’s corals.”

Donà and her colleagues surveyed several sites in the 40-hectare preserve in October 2015 and January 2016. In addition to bleached corals, they found another 13 percent to 22 percent of the corals were paling.

“This is another data point on the staggering breadth of damage...

A survey of the Great Barrier Reef in Australia also found extensive bleaching, more than scientists had anticipated. The Great Barrier Reef Marine Park Authority and partners reported yesterday (May 29) that in 2016, 29 percent of corals died—even greater than the expected 22 percent loss. One area, Port Douglas, experienced a 70 percent die-off.

“The amount of coral that died from bleaching in 2016 is up from our original estimates and, at this stage, although reports are still being finalised, it’s expected we’ll also see an overall further coral cover decline by the end of 2017,” Marine Park Authority Chairman Russell Reichelt says in a press release.