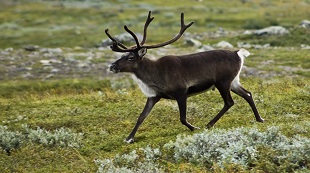 WIKIMEDIA COMMONS, ALEXANDRE BUISEMany species of birds and mammals, including reindeer, avoid power lines because they are able to see the ultraviolet (UV) light the cables given off, researchers proposed in an article published last week (March 12) in Conservation Biology. Humans can’t see UV light, but many animals can, including reindeer and caribou, which use it to find plants under the snow. The research team, led by Glen Jeffrey at University College London, had previously studied visual response to UV light in reindeer.

“In darkness, these animals see power lines not as dim, passive structures but, rather, as lines of flickering light stretching across the terrain,” the researchers wrote in their paper.

“There are hundreds of examples of animals avoiding power lines. Now we know that, not only do these clear-cut corridors mean exposure to predators, at the same time there is this damn thing flashing at you,” study coauthor Nicholas Tyler, of the University of Tromsø in Norway, told The Guardian.