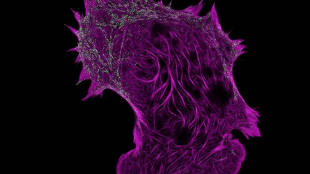 Filamentous actin, captured by super-resolution structured illumination microscopy VIMEO, HHMI NEWSEric Betzig, Stefan Hell, and William Moerner scooped up the 2014 Nobel Prize in Chemistry for their contributions to the development of super-resolved fluorescence microscopy, which broke the theoretical limit of microscopic resolution imposed by the wavelength of light. Now, Betzig, of Janelia Research Campus in Ashburn, Virginia, and his colleagues have applied the new techniques to watching live cells in action, generating images and videos of protein movement and interactions as the cells internalize molecules. The team published its results this week (August 27) in Science.

“These methods set a new standard for how far you can push the speed and non-invasiveness of super-resolution imaging,” Betzig said in a press release. “This will bring super-resolution to live-cell imaging for real.”

Betzig and his colleagues achieved their success by improving the spatial resolution of structured illumination microscopy...

To improve the technique, Betzig and his colleagues turned on only some of the fluorescent tags at a time, an approach they called patterned photoactivation nonlinear SIM. “We can do it and we can do it fast,” he said. Indeed, the researchers were able to capture 25 snapshots (to create a single composite image) in about one-third of a second. They used the new technique to watch as proteins broke down and changed shape as well as the dynamics of cell-surface pits called caveolae.

This movie allowed the researchers to measure the effect of the actin cytoskeleton on clathrin-mediated endocytosis.