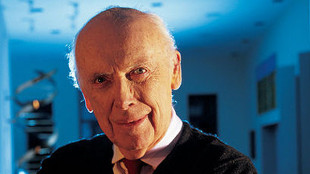 James Watson shared the 1962 Nobel Prize in Physiology or Medicine with Francis Crick and Maurice Wilkins for determining the double-helix structure of DNA. Watson, 86, sold his Nobel medal to an anonymous bidder last week (December 4) at Christie’s auction house in New York City for $4.1 million. This was the highest price ever paid for a Nobel and the first time a living scientist has sold one of the prizes.

Watson has expressed controversial opinions on race and gender, and in 2007 the molecular biologist retired from his post as chancellor of Cold Spring Harbor Laboratory in New York after an uproar over comments he made to the British newspaper The Sunday Times. He suggested that black people were less intelligent than white people, and added, “Our wanting to reserve equal powers of reason as some universal heritage of humanity will...

Watson told The New York Times that he planned to donate most of the proceeds from the sale to academic institutions, including the University of Chicago, which he attended as an undergraduate; Indiana University, where he earned his PhD; Cambridge, where he and Crick worked; and Cold Spring Harbor Laboratory. “The sale is to support and empower scientific discovery,” he said.

In response to Watson’s provocative views, Francis Wahlgren of Christie’s told The New York Times, “As far as Christie’s is concerned, the monumental discovery of the double helix is what this is about, and the 1962 recognition is an essential part of that. Posterity will remember him for that, whether he said things that are controversial or not.”